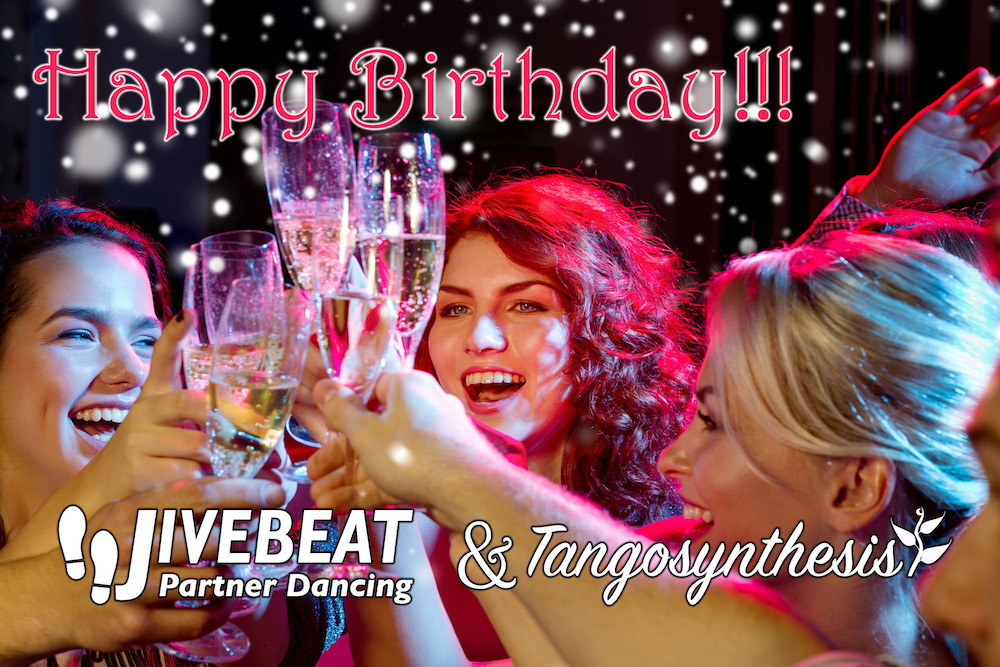 It was three years ago today that I opened Jivebeat and taught my first ever dance class. This was not something Iâ€™d ever imagined that I would be doing, particularly since I started dancing so much later in life than most of those who end up making a career out of it (I was 42 when I went to my first class), but I knew from the moment I clipped a radio mic to my head and started going through the fundamentals that it was something I was going to enjoy.

The story of how I got into dance teaching almost by accident, and how at some point this switched from being all about modern jive to focusing on tango has been told many times before, so Iâ€™ll let you read about that elsewhere. But I rarely talk about the ups and downs of running a dance class, and why I kept going with it even through the more difficult times. So on Jivebeatâ€™s third birthday I want to look at what it has meant to me to be doing this.

Setting up that first class was an easy decision for me, as I knew that I loved dancing and people had told me many times before that they liked the way I taught things and explained what to do. A far harder decision was to work out where that first class would be and how to tell people that it existed, and I soon discovered that my expectations of â€œIf you build it, they will comeâ€ were somewhat optimistic. I assumed from the start that if you put a class in a central location and advertised it well enough in the surrounding area that it would naturally gain followers. But thatâ€™s a long way from what happened, and after an initial surge of visitors from people I knew and interested locals, the numbers soon dropped to a point where from a financial perspective it made little sense to continue.

But in that period of learning and start-up I realised something important. Teaching dance was not just something I did, it was something that gave me purpose. I am an engineer by training, a quality assurance analyst by experience, and a creative designer by passion, but whilst I love all of those things and would never walk away from them, they all lack that immediacy of seeing people turn up to a dance class then leave three hours later happier and more relaxed than they were at the start. Teaching dance gives me the opportunity to work directly with people and to shine a bit of light and fun into their lives, and that made it all worthwhile.

Without the numbers turning up to the classes however, there was a real risk that the decision to continue teaching would be out of my hands. We are not a charity and anything we do has to be financially viable as well as fun, so this meant that we needed to change things around to get more people interested. We moved venues a few times and adjusted the format of the classes, and this seemed to work for a while, but it soon became obvious that there was something else missing. I had based my classes on teaching modern jive in the way that I liked to learn it: giving people the tools to understand the dance and to improvise for themselves, rather than just learning moves by rote and hoping they can string them together later on. There were a few people who wanted to learn modern jive in that way, but the majority of them would rather go to a busy venue and dance the moves they already know rather than focus on technique, and I had neither the budget nor the venue to set something like that up.

And then one day I accidentally taught a tango class. The concept of accidentally teaching anything sounds strange, but that is really how it happened. It was a quiet night, and so with no planning or preparation I asked the group if they would like to try something a bit differentâ€¦ maybe some tango. And they said yes. Moreover the following week they asked me to do it again. And again the next week. And things began to change.

Tango is different to modern jive in almost every way, and so I had to rapidly learn new ways of teaching to encompass this other style. I had qualified as a modern jive teacher through a formal program overseen by the UKA, but there is no equivalent for tango so I had to work it out for myself. I took the bits I found most useful from all my own teachers, blended them with teaching methods I had been given as part of my qualification, then merged it all together and began to develop my own style.

It worked. People started to come who were really interested in learning and developing their tango, and the classes became viable again. But something else happened that I had not been expecting, which was that teaching tango became even more important to me than teaching modern jive. There were a number of reasons for this. One was that it provided more of a challenge because I had no framework on which to base my teaching and had to devise it all myself. Another was that being a dance that is far more about technique and understanding than it is about memorising steps, it fitted with the way I had been trying to teach modern jive. But the main reason was, I think, that it meant more to the people learning it.

Tango touches something inside you that other dances seem to miss. It is often described as a â€œdance of connectionâ€, which is generally understood to mean a connection between you and your partner as with no rules and no choreography you have to move as one if you are going to make it work. But I see it primarily as finding connection with yourself, as tango teaches you to understand your own body and how it interacts with its surroundings like nothing else Iâ€™ve ever done. Maybe contemporary ballet has the same effect, but being in my mid-fifties already Iâ€™m unlikely to ever try that myself, so for me it is tango that finds the connection.

Tango, although being quite technical and difficult to master, is also far more accessible than modern jive, as it is low impact and the basic step is simply walking. Modern jive requires much less energy and fitness than its traditional counterpart, but it is still a bouncy and energetic way to spend an evening and a good part of your weekly cardio workout. Tango however can be as slow and as calm as you want. There is no requirement to dance on every beat, there is no bounce, and you generally wonâ€™t feel like you need to improve your fitness regime in order to survive a class. This really does mean that itâ€™s a dance that is open to everyone. Young and old, fit or out of condition, if you can walk (or even - with a bit of adjustment - use a wheelchair) then you can get something out of tango.

Jivebeat had evolved, and with all the tango we were doing we needed a new name. I tried â€œTango Synthesisâ€ as I was hoping to convey the link between our modern jive background and our tango future, but I soon realised that the name itself had a better meaning, and I merged the words together. â€œTangosynthesisâ€ was born;  just as plants need photosynthesis to thrive and grow, so we need something to find our connection to ourselves and to our surroundings, and for me that was tango. Tangosynthesisâ€¦ growth through tango.

So hereâ€™s to the first three years of Jivebeat, now Tangosynthesis, and may there be many more to come. A lot has changed from that first evening, but Iâ€™m enjoying teaching even more now than I did then.