Is Tango its own worst enemy? 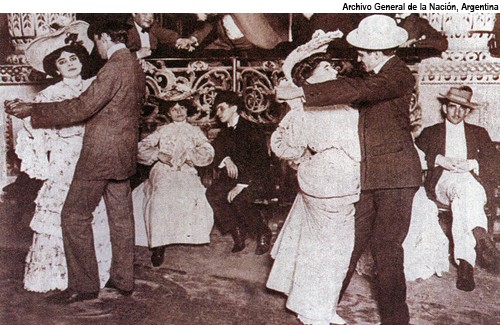 For many people, tango is not just a dance. It is defined by the music, the clothes, and the environment in which it is danced as much as by the dance itself. Old musical recordings from the Golden Age of Tango set down by famous tango musicians set the tone and atmosphere, and everyone attending the venues is expected to dress in a way that at least gives a passing nod to the styles of 1950s Buenos Aires. But this approach is not universally appreciated, and for a lot of people new to tango this orthodox traditional atmosphere is what keeps them away. If tango is to survive and grow it needs to learn how to cater to these new people as well as the existing dancers.

I talk to a lot of people about tango and encourage them to come along to one of our classes or events and I hear all sorts of reasons for why they probably would not enjoy it. Favourite excuses for not giving it a try include "You have to be athletic for that, don't you?" and "I tried dancing once, but I could never remember the steps." These are understandable and sometimes people come around after finding out more, but it is the comments from people who do know something about tango and may have tried it for a while that I find most revealing.

These are all genuine things that people have given to me as reasons why they would never go back to tango again. Remember that these are people who liked the look of the dance, tried it out, enjoyed it enough to go along to a social event, and then somehow got put off from ever going back. So what is going on?

For many organisers of traditionally styled tango events the dance cannot be separated from the music. For them, if the dance is called 'tango' then you must dance it to music written especially for tango, and written by one of the named famous tango bands from the early part of the 20th century in Buenos Aires. No other music will do, and if you dance it to anything else it clearly isn't tango.

Traditional venues often follow the "tango codigos", the rules defining how tango social dances are formatted. These rules cover a lot of areas, and it is not uncommon for unwary dancers to be reprimanded - or even to be asked to leave - for not following some rule that "everyone knows". Your type of footwear, talking at the wrong moment, dancing with the wrong person, sitting at the wrong table, and doing the 'wrong sort of tango' can all earn you a word from the organiser.

Dance social events of all kinds can be very cliquey, but the more traditional-styled tango venues can end up being the most cliquey of all. It is very hard to introduce yourself as a new dancer into a group where people are not encouraged to talk to each other, and turning up with a partner at the venue means you are "taken" for the night and unlikely to be asked to dance.

With conversation discouraged and women introducing themselves to men to ask for a dance expressly prohibited in some venues, getting a dance as an unknown follower can be next to impossible. It is not unusual for even the best tango dancers to spend most of the evening sitting waiting patiently to be asked to dance, but never being approached by any leader for the whole evening.

Tango needs to grow. If you go to any tango social you will see that the average age of attendees is definitely on the older side (as indeed am I, so no judgement there!). Part of that is because older people tend to have more time to do things like social dancing, but part of the problem is definitely that tango does nothing to encourage new younger people into the family. And this needs to change.

Tango organisers and venues need to acknowledge the problems are largely self-made, and take steps to encourage a new younger audience to the dance.

These are easy changes to make if there is the will, and maybe what is needed is for a new generation of organisers to start alongside the traditional venues. No-one is saying that the traditionally-styled approach must go, but simply that it cannot be the only option or tango will fade away as all the older generation of dancers slowly retire. No-one is saying that the formal approach must disappear, or that we can never listen to Golden Age tangos ever again, but there needs to be choice and acceptance of a more modern and fun approach in the tango community.

This change has already started in Buenos Aires, with the codigos being held in less prominence in many venues and music being played from all eras - including modern non-tango music. But somewhat bizarrely there has been a reluctance to adopt this new approach and openness in the UK and many venues prefer to stick to the old ways saying "this is how it has always been done, so this is how it shall always be". So it is up to those of us that can see what needs to be done to expand our horizons and bring tango up to date.